The exhibition “Rough style: image and myth” presents a new view on an outstanding phenomenon of Russian culture, by extending the existing narrow boundaries of the perception of this school in Russian art.

The exhibition is timed to the anniversary of the Moscow State museum “The Bourganov House”, dedicated to the works of Alexander Bourganov, who entered the professional artistic life in the heyday of the “rough style” in the galaxy of such great masters as Victor Ivanov, Pavel Nikonov, Peter Ossowski, Viktor Popkov, Igor Obrosov, Dmitry and Nina Žilinskiys. It was the time of young artists. Their work, based on the best traditions of the Russian school of art, received a powerful impulse during the “thaw” of the 60s, and went down in history as the art of the “rough style”.

The theme of Russian cultural tradition, implemented by a new plastic language, is represented by Alexander Bourganov in easel works “Girl from Vologda”, “Old worker” and the monumental composition “The Village. Spring”. Generalized symbolic female figure praying with uplifted arms stands in the iconographic pose of Oranta. A rural landscape stretched on her breasts.

Another work of this period, created by A. Bourganov in search of new expressive means for solving complex problems of space and scenery transmission – “House.” Here he first applied compositional method “lattice”, which developed later, especially popular in the second half of the twentieth century lattice structures.

A.Bourganov’s program works, summed up the period of the rough style, became “Hunchback”, “Pregnant” and tragic “Death of a miner.”

The exhibition presents A.N. Bourganov’s and other great masters of the “rough style” works from museum and private collections. Among the paintings should be noted Viktor Ivanov’s portrait of Pauline Igoshina (preparatory sketch for the painting “Funeral in Isady”), Victor Popkov’s linocut “Rural Scene”, Victor Žilinskiy’s painting “Family by the sea side”, Tahir Salahov’s sketch “Always great – Edward”. 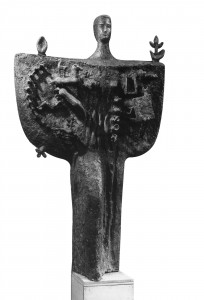